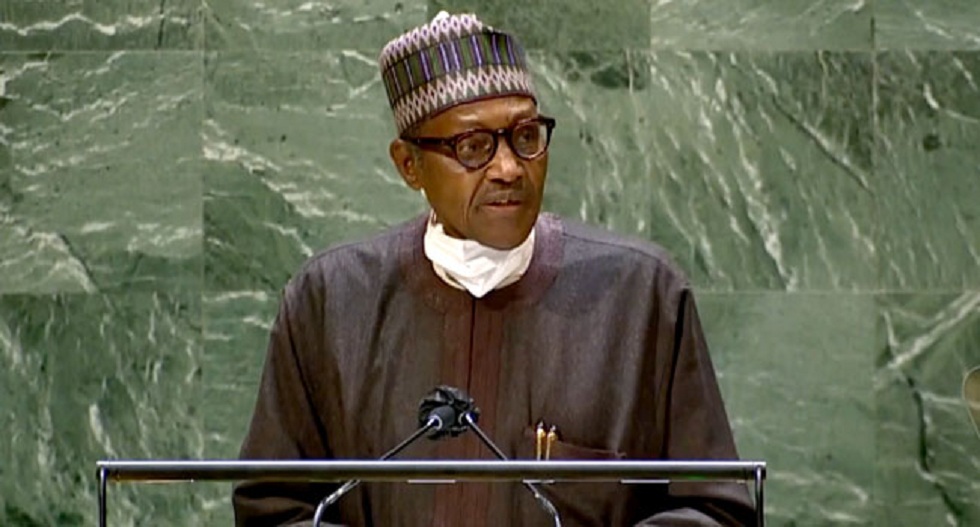 Following is his full speech:

On behalf of the Government and people of Nigeria, I congratulate you on your well-deserved election as President of UNGA77. I assure you of the full support and cooperation of the Nigerian delegation during your tenure.

I commend your predecessor, His Excellency Abdullah Shahid, for the many remarkable achievements of the General Assembly under his leadership during these challenging times.

May I also congratulate the Secretary-General, Mr. Antonio Guterres on his ceaseless and untiring efforts to promote peace, security and development, very much in line with his exalted role.

Mr. President, The first time I could have addressed this August Assembly was in 1984, when I was the Military Head of State of the Federal Republic of Nigeria. Thirty-one years later, I had the great privilege to personally address the Assembly in 2015,as the democratically-elected President of my country. As I approach the end of my second and final four-year term, I am reminded of how much has changed in Nigeria, in Africa, and in the world, and yet, how some challenges remain.

We are now more severely tested by these enduring and new global challenges, paramount among which are conflicts increasingly being driven by non-state actors, proliferation of Small Arms and Light Weapons, terrorism, violent extremism, malignant use of technology, climate change, irregular migration, and disparities in opportunities for improved standards of living.

Despite the challenging international environment, the United Nations has proved that it can be strong when the will of its members is harnessed for positive collective action.

The guiding principle of this extraordinary institution is the promotion of peace and security, development and human rights.

Latest in a chain of events challenging these principles is the Ukraine conflict which has already created strains that are perhaps unprecedented for a generation.

Such a conflict will have adverse consequences for us all, hindering our capacity to work together to resolve conflicts elsewhere, especially in Africa, the Middle-East and Asia. Indeed, the ongoing war in Ukraine is making it more difficult to tackle the perennial issues that feature each year in the deliberations of this Assembly, such as nuclear disarmament, the right of the Rohingya refugees to return to their homes in Myanmar, and the Palestinians’ legitimate aspirations for statehood and reduction of inequalities within and amongst nations.

The danger of escalation of the war in Ukraine further justifies Nigeria’s resolute calls for a nuclear-free world and a universal Arms Trade Treaty, which are also necessary measures to prevent global human disasters.

In this regards we must find quick means to reach consensus on the Nuclear non-proliferation Treaty with related commitments by nuclear weapon states.

I remain firmly convinced that the challenges that have come so sharply into focus in recent years and months emphasize the call by Nigeria and many other Member-States for the reform of the Security Council and other United Nations Agencies.

We need more effective and representative structures to meet today’s demands that have since outgrown a system designed for the very different world that prevailed at its foundation in 1945. Change is long overdue.

Mr. President, This is the first meeting we are having here in New York without the restrictions that characterised the last three years. The COVID-19 pandemic ripped across National borders like a toxic whirlwind, leaving in its wake a legacy of pain and loss.

Happily, we also witnessed an incredible level of innovation and creativity from those who devised treatments and vaccines. These laudable achievements were underpinned by partnerships and international cooperation.

We have also seen the bravery, care and endurance of health professionals at every corner of the globe.

I am happy to note that in Nigeria, our healthcare agencies were able to form effective local management and engaged international partnerships with multinational initiatives like COVAX and private groups like the Bill and Melinda Gates Foundation

These efforts helped mitigate the impact of the pandemic and we were mercifully spared the images of overwhelmed hospitals, overworked healthcare personnel and high mortality which sadly we saw elsewhere.

With COVID19, we saw very clearly how states tried to meet the challenge of a threat that could not be contained within national borders.

The results were mixed; but at its best, cooperation among stakeholders was outstanding. It facilitated solutions that saved countless lives and eased the huge burden of human suffering.

That same theme of unilateralism and the promotion of national interest competing with the common cause in the face of an existential threat has been our recurring experience in recent times.

In every address I have delivered to this august Assembly, I have dwelt on the issue of climate change, especially as it fuels conflicts and complicates food security.

Climate change reduces opportunity and prosperity which, in Africa, Latin America and some parts of Asia, also contributes to transnational organized crimes.

As part of Nigeria’s efforts at achieving our Global Net-zero aspiration, the current Administration last year adopted a National Climate Change Strategy that aims to deliver climate change mitigation in a sustainable manner.

The measures we took at the national level also require climate justice. Africa and other developing nations produce only a small proportion of greenhouse gas emissions, compared to industrial economies.

Yet, we are the hardest hit by the consequences of climate change as we see in the sustained droughts in Somalia and floods of unprecedented severity in Pakistan.

These and other climate-related occurrences are now sadly becoming widely commonplace in the developing world. We are, in effect, literally paying the price for policies that others pursue. This needs to change.

At the COP26 in Glasgow last year, I did say that Nigeria was not asking for permission to make the same mistakes that others have made in creating the climate emergency.

Fortunately, we now know what we can do to mitigate the effects of the climate crisis and the related energy challenge. As a first step, we must all commit to releasing the financing and the technology to create a stable and affordable framework for energy transition.

Development Finance Institutions must prioritise de-risking energy projects to improve access of renewable projects to credit facilities. There should be no countries “left behind” in this equation.

Rocketing energy costs worldwide are, in part, the product of conflict and supply disruptions to Europe and the Americas. Yet, we are all paying the price. It is, therefore, our expectation that this UNGA 77 & the upcoming COP 27 will help galvanise the political will required to drive action towards the fulfilment of the various existing climate change initiatives.

Another feature of the last decade has been the growing partnership between states and the increasingly influential non-state actors.

There was a time when the most important event at this Assembly was the speech by the world’s most powerful leaders. Now a Tweet or Instagram post by an influencer on social or environmental issues may have greater impact.

Technology offers us nearly limitless opportunities and sometimes runs ahead of the imagination of regulators and legislators. At its best, social media helps strengthen the foundations of our society and our common values.

At its worst, it is a corrosive digital version of the mob, bristling with intolerance and division.

When I began my tenure as President in 2015, distinctions were drawn between the experience of poorer countries and those apparently better able to manage the avalanche of unfiltered information.

Nigeria has had many unsavoury experiences with hate speech and divisive disinformation. Increasingly, we also see that many countries face the same challenge. Clearly, data also know no borders.

In confronting these challenges, we must also come together to defend freedom of speech, while upholding other values that we cherish.

We must continue to work for a common standard that balances rights with responsibilities to keep the most vulnerable from harm and help strengthen and enrich communities.

Efforts to protect communities from the scourge of disinformation and misinformation must also be matched with efforts to reduce inequalities and restore hope to our poorer and most vulnerable of our communities as a means to stem the many socio-economic conflict drivers with which we are faced.

In spite of our efforts, humanitarian crises will continue to ravage some of our communities. Nigeria, therefore, implores our global partners to do more to complement our endeavours.

Indeed, the multifaceted challenges facing most developing countries have placed a debilitating chokehold on their fiscal space. This equally calls for the need to address the burden of unsustainable external debt by a global commitment to the expansion and extension of the Debt Service Suspension Initiative to countries facing fiscal and liquidity challenges as well as outright cancellation for countries facing the most severe challenges.

Mr. President, Your Excellencies, Distinguished Delegates, Democracy is an idea that crosses time and borders. Certainly, democracy does have its limitations. The wheels of democracy turn slowly. It can demand compromises that dilute decisions.

Sometimes, it bends too much to special interests that exercise influence, not always for the general good, in a manner disproportionate to their numbers.

But it has been my experience that a democratic culture provides a Government with the legitimacy it needs to deliver positive change.

In Nigeria, not only have we worked to strengthen our democracy, but we have supported it and promoted the Rule of Law in our sub-region.

In The Gambia, we helped guarantee the first democratic transition since independence. In Guinea-Bissau we stood by the democratically-elected Government when it faced mutiny.

And in the Republic of Chad, following the tragic death of its President, the late Idris Deby Itno in the battlefield, we joined forces with its other neighbours & Int’l partners to stabilize the country & encourage the peaceful transition to democracy, a process which is ongoing.

We believe in the sanctity of constitutional term limits and we have steadfastly adhered to it in Nigeria. We have seen the corrosive impact on values when leaders elsewhere seek to change the rules to stay on in power.

Indeed, we now are preparing for general elections in Nigeria next February. At the 78th UNGA, there will be a new face at this podium speaking for Nigeria.

Ours is a vast country strengthened by its diversity and its common values of hard work, enduring faith and a sense of community. We have invested heavily to strengthen our framework for free and fair elections.

I thank our partners for all the support that they have provided our election institutions.

As President, I have set the goal that one of the enduring legacies I would like to leave is to entrench a process of free, fair and transparent and credible elections through which Nigerians elect leaders of their choice.

Mr. President, The multiple challenges that face us are truly interconnected and urgent, and your choice of this Session’s theme, “A watershed moment: transformative solutions to interlocking challenges” is apt.

In keeping with our obligations as Member States of this noble Organisation, we all must do our utmost to work with you toward resolving them. In this regard, I reiterate my Delegation’s full and resolute cooperation.

Let me convey my final reflection from this famous podium. We live in extraordinary times with interdependent challenges but enormous opportunities. The pace of change can seem bewildering, with sometimes a palpable and unsettling sense of uncertainty about our future.

But if my years in public service have taught me anything, it is that we must keep faith with those values that endure. These include, but are not limited to, such values as justice, honour, integrity, ceaseless endeavour, and partnership within and between nations.

Our strongest moments have always been when we remain true to the basic principles of tolerance, community, and abiding commitment to peace and goodwill towards all. I thank you all. 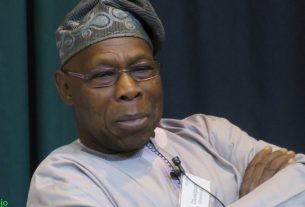 We notified Buhari of our meeting, says Obasanjo 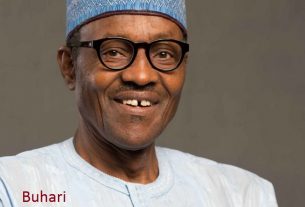 ‘Buhari will concede defeat if…’ 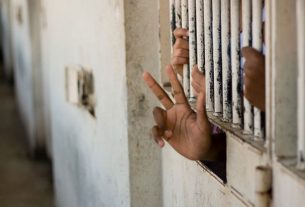