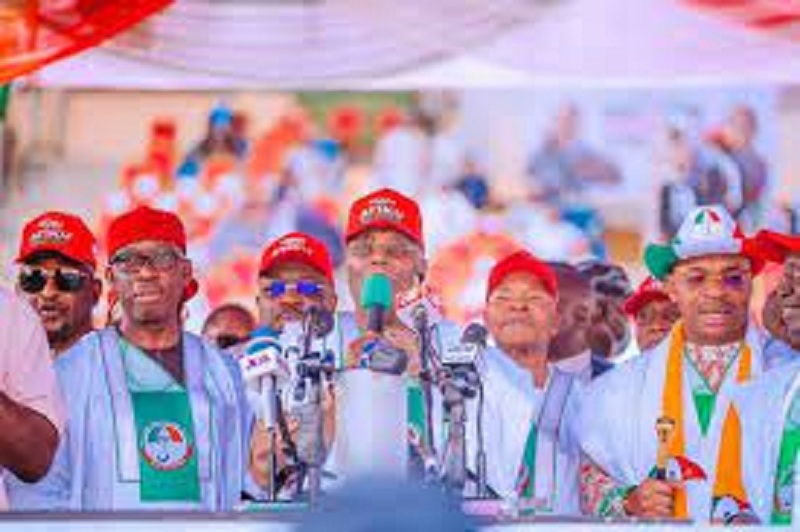 The Presidential candidate of the Peoples Democratic Party, Atiku Abubakar, has renewed his commitment to revamp Nigeria’s ailing economy as well as improve security and the quality service delivery in the education and health sectors.

Atiku made the promise while addressing a crowd of party supporters, in Delta State, on Tuesday.

He said the PDP campaign train was in Delta State to show its gratitude to the people of the state for keeping faith with the party since its inception in 1998.

The candidate also expressed gratitude to students of various institutions from the Niger Delta for coming out in their numbers to endorse the Atiku-Okowa Presidential ticket, he promised not to let them down.

Atiku said, “Because of the support we have received all along, particularly I in my entire political career from 1999 till date Delta State has never failed me and I want to tell you that I shall not betray the trust of Delta State and in fact united Delta sub-region all together.

“I want to assure you that in my agenda is education. I want to commend this young man who on behalf of all the students in Niger Delta has today endorsed our candidature.

“In my policy document, there shall be no more ASUU strikes. One of the items that are of benefit to is the issue of resource control or restructuring.

“You as Niger Delta shall benefit from that policy because it is our intention to devolve more powers and more resources to your respective states to deal with your problems instead of waiting for the federal government to do so.

“It is our commitment to restoring the unity of this country. How do we do it, how do we achieve it? We will make sure every part of this country, every religion in this country has a sense of belonging in the federal government, that one I promise you.

“What else I promised you? I said the security of this country is paramount. You cannot develop education, and the economy and cannot live in peace without security.

“It is our responsibility and commitment to make sure we secure this country safe wherever you may live. You must believe in PDP, do you know why?

“Delta State has been PDP since 1999, have you seen the kind of progress that have been achieved in Delta State, is that not PDP?

“Is that not PDP, Why will you go to another party for God’s sake? You have no reason to do so. I promised in my five-point agenda to make sure the economy has a commanding height.

“Once you improve all those things I am saying you will see foreign investment trooping in just like when the PDP was in power we had the biggest economic growth until we became the biggest economy in Africa. Is that not so?

“We had no problem with foreign exchange, high inflation, scarcity of goods, prices of goods and services. Why will you go to another party that has now suffered us in the last eight years?“

Earlier, the National Chairman of the PDP, Dr. Iyiorchia Ayu, expressed delight that he was given the privilege of commissioning several developmental projects executed by the Dr. Ifeanyi Okowa-led administration last April.

He enjoined the people of the state to come out in their numbers to vote in the PDP during the forthcoming elections.

Ayu also led party chieftains present at the occasion to receive those who decamped from other political parties to join the ranks of the PDP in the state.

In his remarks, the Chairman of the PDP Presidential Campaign Council, Governor Udom Emmanuel, referred to the campaign in Delta State as a celebration.

He reiterated the promise of the PDP to revive ailing industries across the nation especially in the Niger Delta in order to provide jobs and stimulate the economy to encourage the inflow of direct foreign investments.

Emmanuel said, “All the companies that were here, they have all gone, but with your son as the next Chairman of the National Economic Council and with our President, the man who knows Business, who has done business.

“ In this life, if you cannot run a kiosk, you cannot run a multi National company, it takes someone who has managed business, education, and people to be able to manage Nigeria out of the situation we are in today and the only person is Atiku and Okowa of the PDP.

“In those days when you enter Warri and other areas, you will see the activities of the oil companies and our area was booming, because we own 50 per cent, the foreigners own 40 per cent, so the Chairman together with the president will return all IOCs to the Niger Delta and the economy will boom again.

“The whole Niger Delta region will return to its economic power.” He enjoined voters in the state to work towards voting in the PDP with a large margin of votes.

He said if voted into office, his administration would change the security architecture in the country and grow the economy.

Abubakar said that between 1999 and 2015, PDP grew Nigeria’s economy and made it the largest in Africa, but that the All Progressives Congress (APC) destroyed it with its inept leadership.

He said that with adequate security and right economic policies, a PDP administration led by him would attract Foreign Direct Investment that would grow the nation’s economy, adding security of the country was paramount because no nation could develop without security.

He told Deltans that the team was not in the state to campaign, saying “we are here to show our gratitude and appreciation to say that we are with you in all respects because of the support we have received from you from 1999 to date.

“All through my political journey, Delta state has always supported me and I want to promise you that I shall not betray the trust of Delta and the entire Niger Delta.

“That is why in my modest appreciation, I chose one of you as my vice presidential candidate and you know that a running mate is always a stepping stone.

“Therefore it is up to you to show your support by giving Governor Okowa the massive support to enable us to rescue and rebuild our dear country.”

On his policy document, the PDP Presidential flag bearer stated that his administration would pay attention to developing the education sector, and promised that under his watch, strikes by members of Academic Staff Union of Universities (ASUU) would be eradicated.

“The Niger Delta and other parts of the country will benefit from our resource control and restructuring agenda because it is our intention to devolve more powers to the states and local governments to tackle peculiar challenges facing the people.

“The APC government has disunited Nigeria in all aspects and it is our commitment to restore the unity of this country by ensuring that every part of this country has a sense of belonging.

“You must believe in PDP because as a party we built the biggest economy in Africa until the APC came and destroyed it in 2015.

“Why vote for the same party that has suffered us in the last seven years plus? Let us vote them out to unite and rebuild our country again,” he said.

The Vice-Presidential Candidate of the party and Governor of Delta, Sen. (Dr) Ifeanyi Okowa, said that Atiku knew how to address the socio-economic challenges bedevilling the country and urged the people to vote for the party.

According to him, we all know that the APC-led Federal Government brought poverty to the nation; they destroyed our economy to the extent that Nigerians are now hungry, without food to eat.

“How can a bag of rice be sold for almost N50, 000? It is only Atiku that can solve the problems in the country because when the PDP took over the reins of power in 1999, Atiku and Obasanjo were able to restore the nation’s lost glory.

“Atiku has assured Nigerians that he will revive the economy of the country and reposition it for optimum productivity in all sectors of the Nigerian economy.

“For over 20 years, Atiku has been advocating for the restructuring of Nigeria where states and local governments will get more money that will stimulate growth and development and this is what we want in the Niger Delta.

“Atiku has also promised that his administration, if elected, will put in place, a constitutional framework that will enable states to have State Police so as to stem the tide of insecurity in the country.

“Atiku is an experienced politician that has the capacity and pedigree to reset the country and I call on all eligible voters in the state to ensure that they have their PVCs to enable them vote in the forthcoming general elections,” Okowa stated.

National Chairman of the party, Dr Iyorchia Ayu, on his part, congratulated Deltans for the choice of Okowa as Vice-Presidential Candidate and lauded previous governors of the state for their contributions to the growth and development of the state.

He called on sons and daughters of the state to vote massively for all PDP candidates in the general elections.

The rally recorded the defection of many members of APC in the state, including the State Secretary, Chief Nick Ovuakporie, to the PDP.

The party also got the endorsement of the leadership of the National Association of Nigerian Students (NANS) Zone B, led by the Zonal Coordinator, Comrade Great Tamarapreye.

The students said the endorsement was in recognition of Okowa’s efforts in establishing three new universities in the state and ensuring that lecturers in the institutions were on duty while ASUU was on nationwide strike for eight months.

Earlier, Atiku Abubakar had held a meeting with traditional rulers in Delta, at their Secretariat in Asaba, and assured that if elected, he would ensure that clear constitutional roles were given to monarchs in the country. 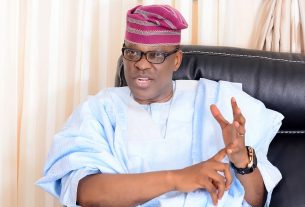 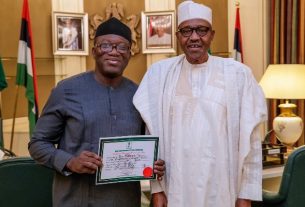