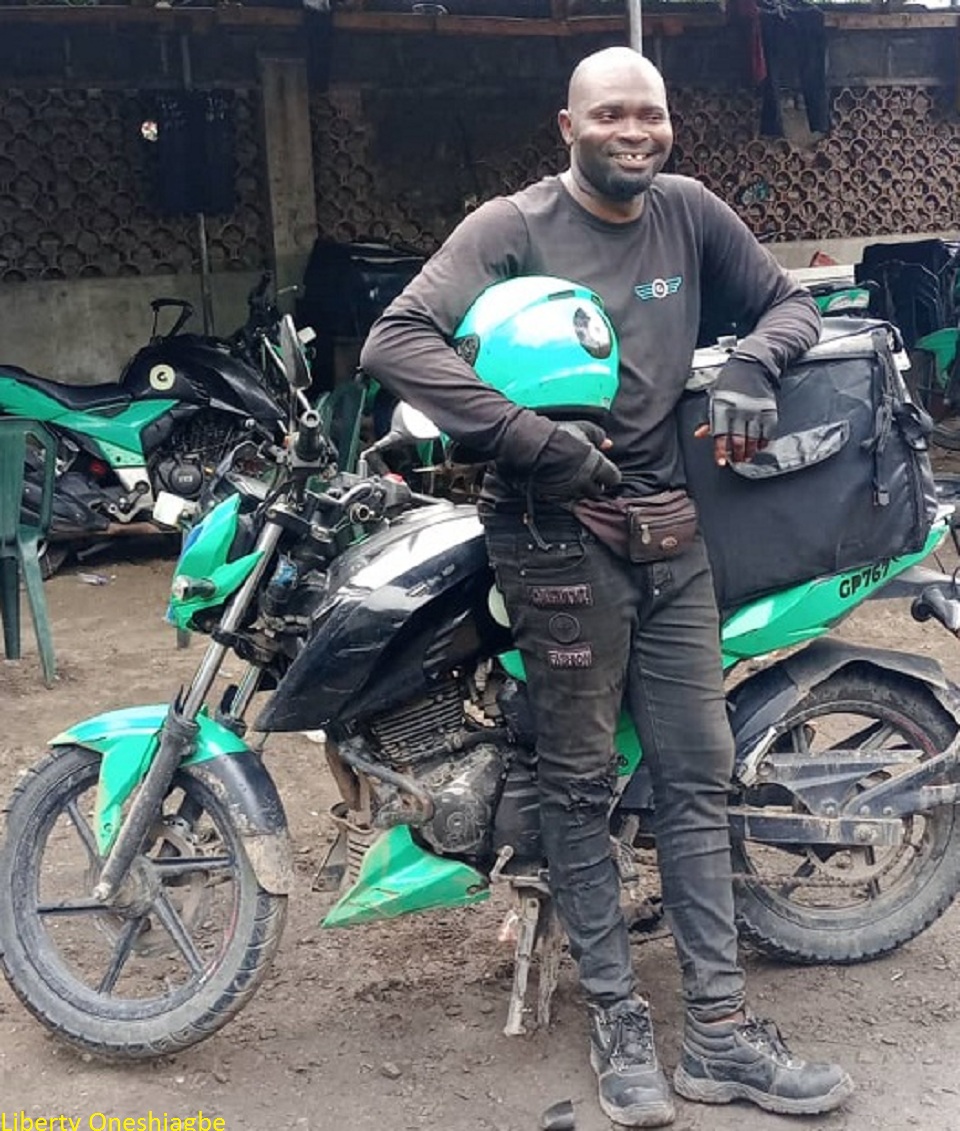 Liberty Oneshiagbe had ridden bikes practically all his adult life. About three years ago, he got employed as a pilot (bike rider) with Gokada (which started as a commuting service but now is into last-mile delivery in Lagos). The second day after joining Gokada, he had an accident with his bike. But, today, he is Gokada’s “Pilot President”. Read his fascinating story and those of other interesting people in this new initiative by The Journalism Clinic.

My name is Liberty Oneshiagbe.

When I came to Lagos in 2017, I joined Arksego Security, a well-known private security firm covering so many companies in this Lagos. Their Head Office is at Gbagada, very close to Charlie Boy’s Bus Stop. They provide security for Sterling Bank, First Bank…so many companies.

I did a two-week training with them, after which I was posted to the Igbosere Branch of Sterling Bank.

I live in Ikorodu (about 36 kilometres from my work place).

I was leaving Ikorodu as early as possible for my work. I worked like that for six months or thereabouts. It wasn’t easy for me going to work  from Ikorodu every morning…and my salary then was just 30,000 naira.

So, I talked to my supervisor that, since we have Sterling Bank everywhere…in Ikorodu, Ketu, why not send me to any of those ones close by, so that the journey from Ikorodu would be easier for me? The supervisor said something would be done to help me.

One day, I was informed that I have been reposted. I was happy, believing that I was posted to Ketu or Ikorodu but I was told I would be posted somewhere else. and that my salary would be increased because I hold an NCE (National Certificate in Education) in primary education studies. I graduated with a Merit from College of Education, Agbor, Delta State.

I was posted to FBN Capital at Keffi Street, Obalende.

That was where I was working in the same security function and my salary was increased to 40,000 naira. I managed to work there one month. The second month, it wasn’t easy for me. Igbosere was better because even if I came late, people would cover for me. But, at FBN Capital, when you came late, the company would deduct (that day’s pay) from your salary.

It wasn’t easy for me, so I began to look for another job as I have a family to take care of.

One day, a Gokada rider came to drop a staff in the office. The staff was supposed to pay him one thousand, seven hundred naira but he gave him two thousand naira. So, I asked the rider ‘how can an okada man collect two thousand naira just to drop someone?’

The man took time to explain to me. He said they worked via an app, and it was not just an ordinary okada. So, I asked him several questions? Who introduced (the operation)? Is it government? And, the guy really took his time to explain to me. He showed me the distance, how one could take someone from Obalende to Ikorodu and he would charge six thousand naira. I was like ‘Wow.’ All my life, I’ve been a bike rider. I started riding bike when I was in JSS 2. I rode through all my secondary school. All through my higher education at College of Education, Agbor, I was riding. After that, I rode for like six years again in Agbor, before I moved to Lagos four years ago. So, I was like, ‘this is an opportunity for me’ because I like riding on my own. The best thing I know how to do, in my life, na bike I sabi o (I know bike riding). I just had to embrace the opportunity.

But, the issue that I would bring a guarantor and that I did not know much of Lagos, because I was still new in Lagos worried me. I had barely spent seven, eight months in Lagos. Those were my challenges. So, I started thinking: how would I know Lagos. Then, I only knew Obalende to Ikorodu, which was my route. I did not know any other place.

But, God help us, I just have to use my brain. I lived in Benin City before. The guy told me it was not going to be difficult because they use Google Maps. I had never used Google Maps. That all I needed to do is enter where I was going on the map and it would just be leading me. On Gokada helmet, there is a Bluetooth and it would be speaking to your hearing, telling you where you are going to. I said, ‘Wow.’ If that is possible, it means that I can do it.

That was how I went to their office. I did my training. I resigned from Arksego. I stopped working for FBN Capital. I stayed for like two months before Gokada called me. When they called me, I was happy. I was glad. I accepted the job.

The first day, I rode their bike; the first day…Gbagada was where I trained before. My first order was Gbagada, so I knew the route to Gbagada. I gladly took that order. I moved to Victoria Island. Just like that. The second day (chuckles), I had an accident. My hand and leg were bruised. I was ashamed to go to the office because it would look shameful that, on the second day, such a thing happened. And, I had been riding bikes for more than 10 years or thereabouts. No, experiencing that kind of a thing, was (shameful) to me to go and explain myself (sigh). Because they have an HMO which takes care of any rider who has an accident or anything like that. Since then, though, I have not had any other accident. That accident was just a peel on my body. It was the only accident I have experienced since three years that I joined Gokada.

From scratch as a pilot, we joined…the first phase…Mr Fahim (Saleh), the founding father (CEO of Gokada, who was fatally stabbed in New York in July 2020)…after I joined…I rode for one year plus…he came and said that the small (Daystar) bikes we were using were outdated and that he was going to bring TVS bikes and that every rider would own their bikes and if you are not paying up to the amount that you are supposed to pay, you would balance up and the bike becomes your own. Before we joined TVS, we were 1,000+ riders. We were retrained and only 200 of us were accepted back to Gokada. August (2021) would make it two years that we started using TVS. We started using TVS, it got to a point, the (Lagos State) government banned okada rides in Lagos. We stayed for like two months and Gokada started deliveries. That went on, and then came the EndSARS (protests) which disturbed us again. By August we are supposed to finish this contract, and the contract for the bike is two million, four hundred thousand naira. That is how much we are paying (to own) that bike. We are supposed to end our contract by August but because of the government ban, the #EndSARS protests….We are supposed to be paying four thousand naira every day. Because of those delays and stuff like that, I have only paid one point something million naira on that bike. I have till August this year to complete it. Phew.

I was just a pilot. Last year, the riders decided to have leaders to lead them. I was voted as the vice president. So many things came up about the president and he had no option but to resign. After some time when he resigned, another voting took place and I emerged as Pilot President. Total pilots under me now are around 1,600+. 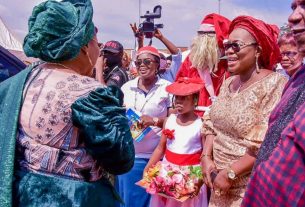 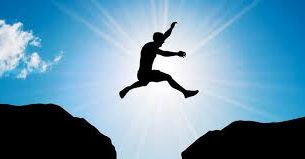 And all our needs will be provided