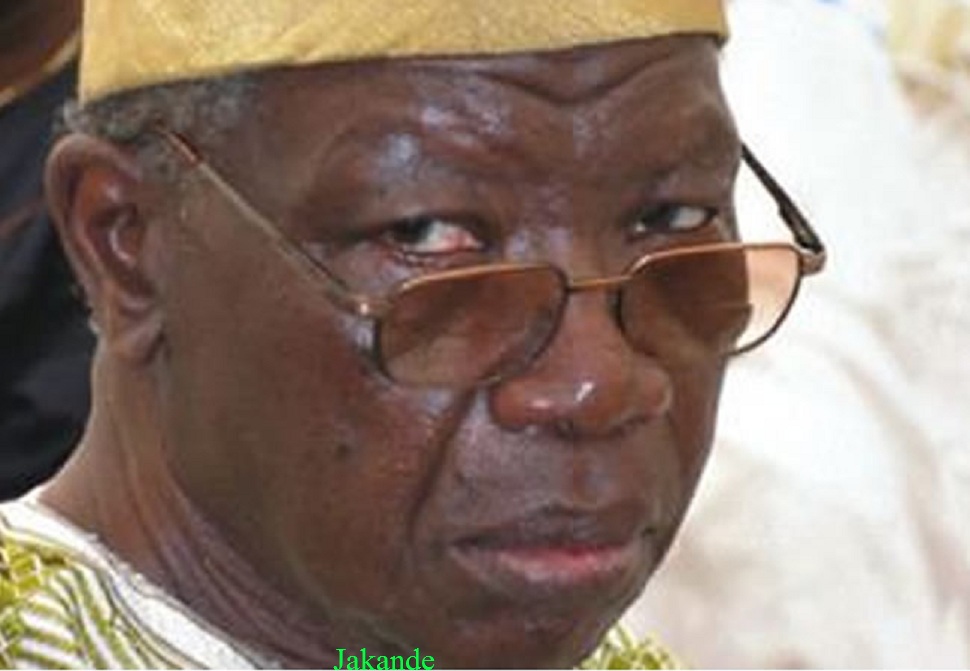 Lateef Kayode Jakande, first democratically elected civilian governor of Lagos State, and a former minister of Works, died on Thursday at the age of 91.

His body was interred at the Vaults and Gardens Cemetery, Ikoyi on Friday.

The event marked the exit of the last of the five governors elected on the platform of the Unity Party of Nigeria, UPN, at the beginning of the short-lived Nigeria’s Second Republic in 1979.

In his days as governor of Lagos, which was also the federal capital at the time, Jakande was called ‘Baba Kekere’, an appellation he earned for his passionate commitment to the ideals of his party leader, the revered Chief Obafemi Awolowo, and his government’s faithful execution of the four cardinal programmes of the UPN.

As Nigeria transitioned from what was then thought to be a 13-year military interregnum, five of Nigeria’s then 19 states elected UPN candidates as governors.

Their party espoused ‘welfarism’ as its ideology and the governors tried to demonstrate this with massive investments in human capital development and physical infrastructure. Their flagship programme was free education in primary and secondary schools.

But standing out even among the quintet of UPN governors was the short man in the Round House of Lagos, who turned around the fortunes of the coastal state. Mr Jakande’s image was built on his success at overhauling a bureaucracy that had moved away from the people in 13 years of military rule at the state and federal levels.

Jakande was born on July 23, 1929, to Rahman Adeniyi Jakande and his wife, Sinotu Aduke, nee Akodu, in the Epetedo area of Lagos Island. His parents had moved to Lagos from Omu-Aran in the present day Kwara State.

The young Jakande attended a public school at Enu-Owa in Lagos Island. He later attended Bunham Memorial Methodist School, Port Harcourt, between 1934 and 1943. He also studied briefly at King’s College, Lagos, in 1943 before enrolling in Ilesha Grammar School in 1945 in the present day east senatorial district of Osun State.

The young Jakande first showed his innate writing skills at Ilesa Grammar School when he edited a literary paper in the school, The Quarterly Mirror.

In 1949, Jakande started a full time career in journalism with the Daily Service. Within four years, he had caught the attention of more prominent newspapers, including the Nigerian Tribune established by Awolowo.

Thus in 1953, Jakande left the Daily Service to join the Nigerian Tribune. In 1956, he was appointed the newspaper’s editor-in-chief. Awolowo had started the newspaper as the mouth organ of his political party, the Action Group, the platform on which he would later serve as the Premier of Western Region.

Under his editorship, the Nigerian Tribune soon became a thorn in the side of the colonial administration as the clamour for self-rule and independence intensified in the British African colonies.

After 22 years in the saddle at the Nigerian Tribune, he resigned in 1975 to establish John West Publications where he published The Lagos News.

He was a pioneer member of the Nigeria Union of Journalists, NUJ, and was a foundation member and the first president of the Newspaper Proprietors Association of Nigeria, NPAN. He also co-founded the Nigeria Guild of Editors, NGE, as a forum for editors of various titles to compare notes on major editorial decisions and socio-economic and political developments in the country.

He joined the Unity Party of Nigeria, UPN, founded and led by his mentor, Awolowo ahead of the general elections of 1979.

He was said to have been encouraged by Awolowo to run for governor in Lagos State and he defeated Adeniran Ogunsanya of the Nigerian Peoples Party, NPP and Ladega Adeniji-Adele of the National Party of Nigeria, NPN.

On the first day of October 1979, Jakande was sworn in as the first executive governor of Lagos State. He was reelected in 1983 but served only three months of his second term when on December 31, 1983, the military struck again and aborted the Second Republic. The soldiers would hold the rein for the next 16 years until 1999 when the Fourth Republic arrived.

When he became governor, Lagos already had a large population on a small territory which stretched its limited infrastructure. Public schools were congested and ran morning and afternoon sessions.

Lagos, which was also the federal capital, had housing deficits, a poor road network, traffic congestion, poor healthcare system and inadequate recreational facilities for a people daily caught in the frenetic pace of living in the city.

He cancelled the two-session school system and built new schools and more classrooms to accommodate the expansion in school enrollment and ensure the pupils attended school at the same time.

As governor, he kept a low profile and remained frugal in his lifestyle. He lived throughout in his personal house which he had built in the Ilupeju area of Lagos long before he became governor. He also continued to use his personal car.

He withdrew his children from private schools and enrolled them at public schools at a time political opponents derided his free education programme as eroding the quality of education in the schools.

Within the four years and three months of his governorship, he laid the foundation for Lagos’ transition into a mega city.

He recorded many feats, including establishing the then Lagos Weekend Television now renamed Lagos Television, Lagos Radio, and building a new state secretariat, House of Assembly complex and general hospitals in all the zones of the state.

His government also built 11,729 classrooms between March and August 1980 and fixed the number of pupils per class at 40. By 1983, the government had built more than 22,000 classrooms.

He also established a teacher training college and a college of education, and concluded the arrangement for the establishment of the Lagos State University in Ojo.

One other area of his administration’s investment that also endeared him to the people was his mass housing scheme which gave birth to many low-cost estates in many neighbourhoods, including Amuwo Odofin, Ijaiye, Dolphin, Oke-Afa, Abesan, Iponri, Ipaja, Abule Nla, Epe, Surulere, Iba, Ikorodu, among others.

In the area of road construction, his administration is credited with the construction, rehabilitation and resurfacing of Epe/Ijebu-Ode Road, Oba Akran Avenue, Town Planning Way, Alimosho-Idimu-Egbe Road, Idimu-Iba-LASU Road, Victoria Island/Epe Road and the new Lagos State secretariat road, among several others.

The administration also established an asphalt plant for the department of public works, which carried out most of the road constructions by direct labour.

He also inaugurated the Onikan Stadium in 1982 as part of his investments in sports.

He constructed the Adiyan water works and expanded the existing Iju water works to increase the state’s water supply capacity from 159 million to 204 million litres per day.

He inaugurated a giant car crushing equipment which had the capacity to crush 45 vehicles per day. The effort was aimed at freeing Lagos streets from the menace of abandoned vehicles that littered and defaced the city.

There were other achievements, especially in the areas of market expansion and construction of lockup shops. He established the small-scale industries credit scheme which preceded the defunct EKO Bank, and also launched LASACO Insurance.

Hiss governorship tenure was truncated by the Muhammadu Buhari military junta. Like his other colleagues, the junta charged and found him guilty of corruption and sentenced him to many years in jail; a trial that was condemned by local and international rights groups. But he was later freed after Ibrahim Babangida overthrew Buhari in a palace coup in 1985.

Following the annulment of the June 12 presidential election by Babangida and after Sani Abacha kicked aside the interim national government Babangida instituted as his successor, the new military dictator persuaded some pro-democracy activists to serve in his regime.

This brought people like Jakande, Ebenezer Babatope, Wole Oyelese, Mobolaji Osomo and Olu Onagoruwa from the South-west into the government.

Jakande was named works minister until Abacha kicked all of them out and embarked on a scheme to perpetuate himself in office.

Jakande’s decision to serve under Abacha has remained a stain on his legacy. Many of his peers never forgave him and it constrained his subsequent role in politics.

But even as a minister under Abacha, Jakande made his mark. To his credit are the construction of what has been dubbed the largest housing estate in Africa – Gwarimpa Estate, in the Federal Capital Territory (FCT), Abuja. He also built the Lugbe housing estate also in the FCT.

Today, Banana Island is arguably the most expensive piece of real estate in Lagos and Nigeria. The new Banana Island is exactly the opposite of what Jakande dreamt of when he discovered and opened up the place as a minister.

Although he built estates and opened posh new areas, he was never linked to ownership of plots of land or other properties in Lagos or anywhere else apart from his house on Bishop Street, Ilupeju, Lagos.

Whether as a governor, minister or party leader, Jakande lived in no other property apart from his Ilupeju house.

Despite ohis eroded influence, he was in active politics till his final breath. Just on Wednesday, he renewed his membership of the All Progressives Congress, APC. His sons, Deji and Seyi Jakande, were elected into public offices at one time or another.

His wife, septuagenarian Sikirat Abimbola, said he met her while she was working with late Hannah Awolowo, wife of the late sage and Jakande’s political mentor. She told The Nation in an interview that since the Awolowos blessed their union, she was convinced she was getting married to the man of her dreams. And so it proved.

Since the news of his death on Thursday, many Nigerians and groups, including President Muhammadu Buhari whose regime jailed Jakande in 1985, have paid glowing tributes to him. They include the Afenifere, former President Olusegun Obasanjo, the incumbent governor of Lagos State, Babajide Sanwo-Olu; as well as his predecessors – Bola Tinubu, Babatunde Fashola and Akinwunmi Ambode. Encomiums have continued to pour in for the man many regarded as the architect of modern Lagos. 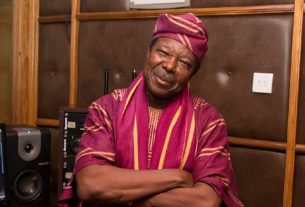 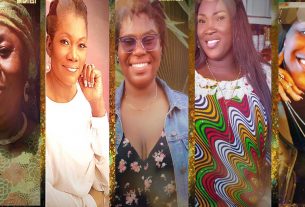 Toast to women of guinness 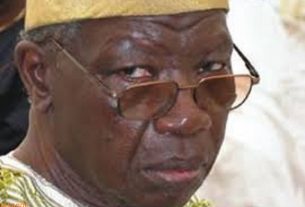 Jakande: An honourable man at 90